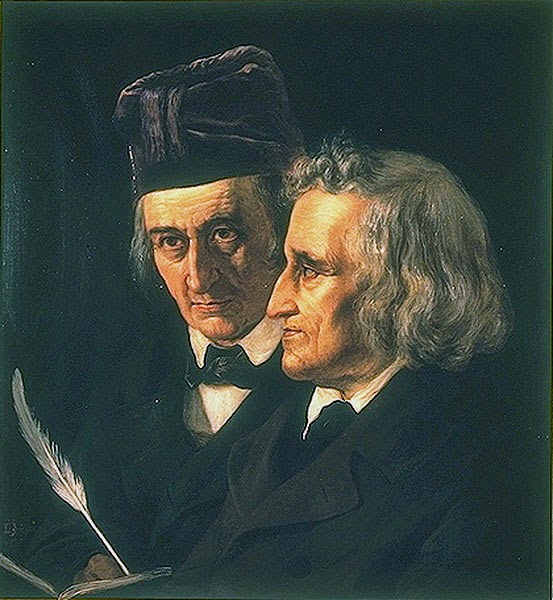 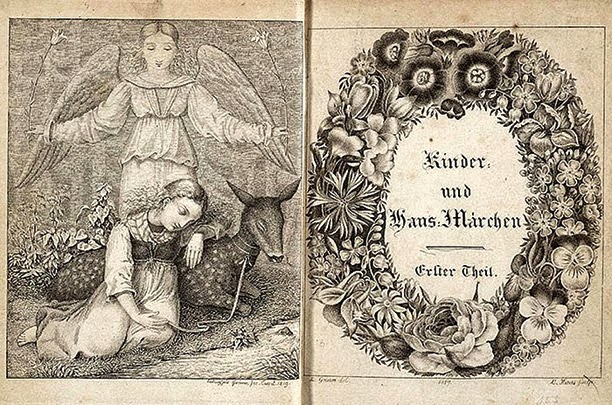 Fig 2 (above) Frontispiece and decorative title page of an 1819 edition of the Brothers Grimm's 'Kinder-und Hausmarchen', illustrated by Ludwig Emil Grimm with engravings by L. Haas.

Jacob Grimm was born in 1785 and his brother Wilhelm in 1786, The brothers were extremely close and both brothers studied law at the University of Marburg. However they were most inspired by Professor Friedrich Carl von Savigny who introduced them to Romantic literature and they joined "Heidelberger Kreis" a group of German Folk Poets.

Their father Philip, a lawyer, had died in 1796 when Jacob was just 11. When their mother Dorothea in died in 1808 Jacob , the oldest of the nine children (eight brothers and one sister) supported the family by working as a librarian (1808-1813) for Jérôme Bonaparte, King of Westphalia.

The brothers devoted themselves at this time to collecting folk tales and legends and in 1812 they published their compilation 'Kinder und Hausmarchen' which comprised of 86 gathered oral folk tales. This collection swelled to 209 stories in its 7th and final edition of 1857. 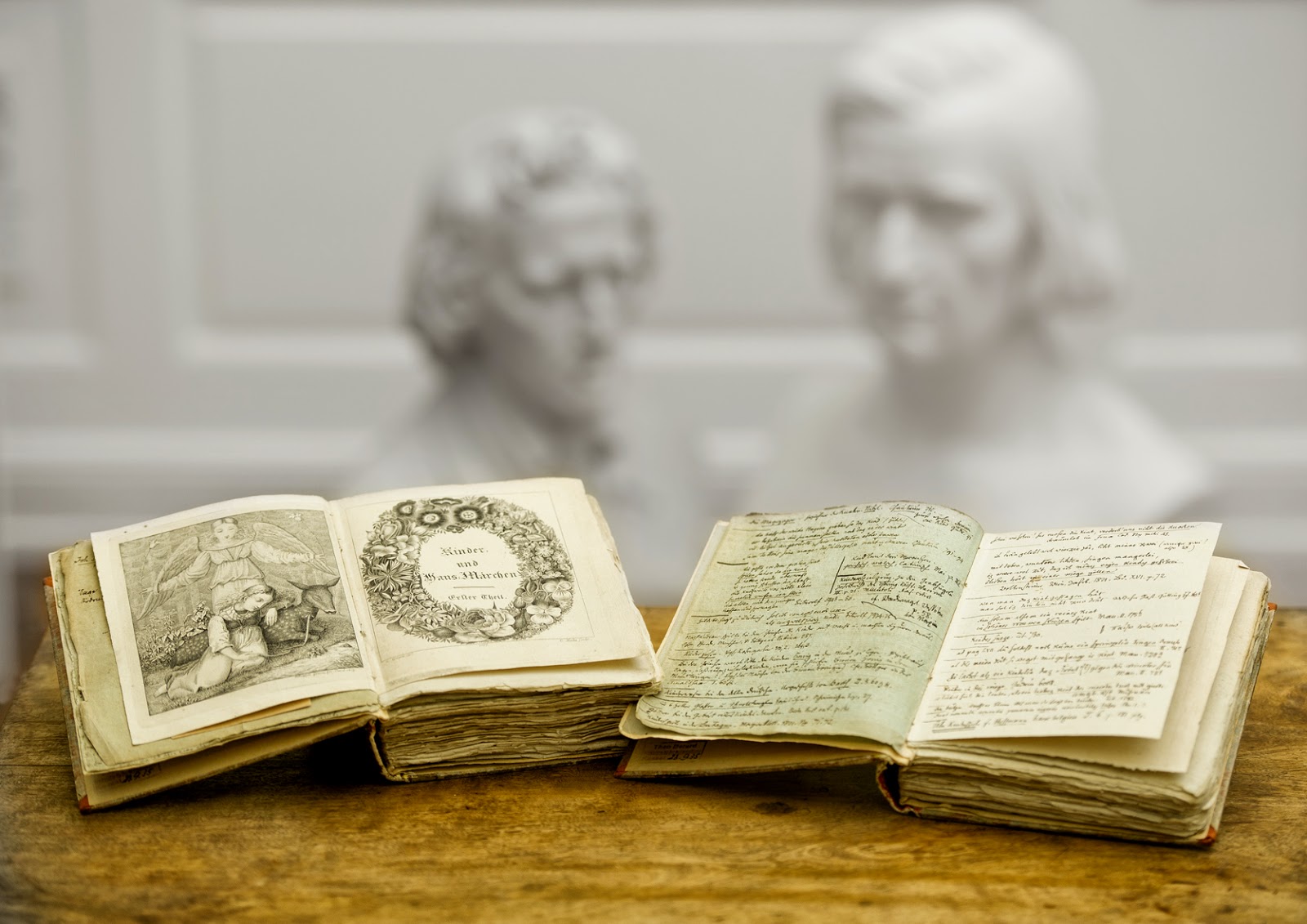 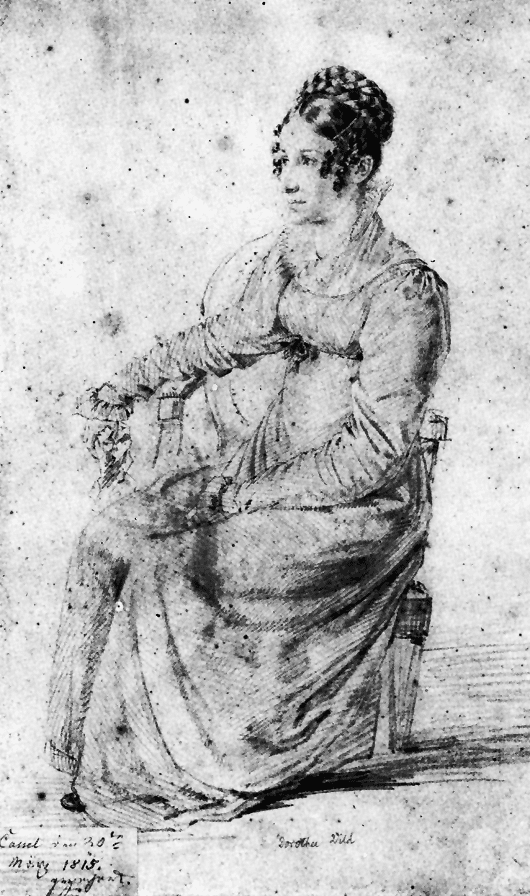 Wilhelm married Dortchen Wild in 1825 and they had four children, during this time the brothers remained in the same household and they published in two volumes of German Legends. In 1819 Jacob published "Deutsche Grammatik", the first book of its kind exploring not only German grammar but also the relationships between languages. 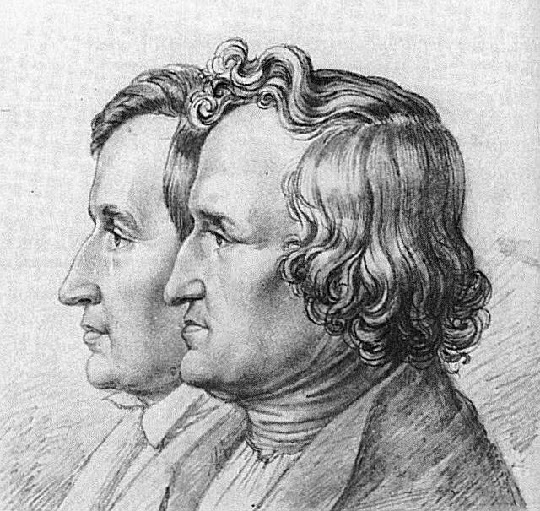 Fig 5 (Above): 1843 Pencil drawing of Jacob and Wilhelm Grimm by Ludwig Emil Grimm

In 1829 both brothers were appointed as professors at the University of Göttingen.
The brothers were politically active seeking a formulation of fundamental rights and a union of German states. Unfortunately they both lost their professorships and were deported in 1835, when they and five of their colleagues opposed the abolition of the Hanover Constitution by the King of Hanover.
The brothers returned to Kassel and then in 1840 obtained professorships in Berlin where they developed "Deutsches Wörterbuch" a complete German dictionary tracing the origin of every word. Jacob and Wilhelm were to live in Berlin for approximately twenty years working on historical and political publications. Wilhelm Grimm died age 73 in 1859 and his brother Jacob followed four years later aged 81 in 1863.